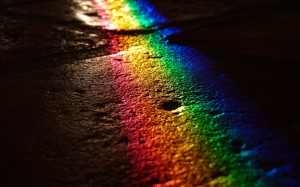 As soon as I finished the Mini Me post, I remembered a sweet picture that Hallie drew for me several years ago.  Thankfully I found it with a few minutes of searching.  The picture is a treasure-To Mom From your Mini Me.  Those of you who know Hallie, know that she has always been a distinct individual;seemingly unimpressionable.  She has always had a strong sense of who she is up until recently.  Now in Middle School there are so many voices calling out to her.  Voices suggesting what activities she should participate in, what music she should listen to, the best shows to watch on TV.  She sees that she is supposed to bunch up the corner of her shirt with a rubber band making a tail.   Those shoes she found detestable last August are suddenly cute.  I am right beside her, but outside influences design her current world..

This picture is simple; Hallie and I standing, all smiles at the end of the rainbow.  A rainbow has forever served as a reminder of God's promise.  I did a parenting Bible Study called Value-Packed Parenting by Kevin Lehman.  The most important thing I remember from the study was the analogy made using a suitcase.  He compared all of the values that we instill in our children as items being placed in a suitcase.  Our children don't necessarily always hold dear those values while at home.  It is when they leave home that they often unpack those values. A rainbow signifies a journey.   While I would like to see Hallie and the other two applying values here and now, I need not lose heart when it seems the things we've taught them are now little more than a buzz in the ear.   We have them in our care for eighteen years.  We need to remember that it takes longer than we'd like- to teach them some things.

Start children off on the way they should go, and when they are old they will not depart from it. -Proverbs 22:6  Did you catch the "when they are old" part?  Hang in there mom and dad.  God's word also says, " For I know the plans I have for you"' declares the Lord, " plans to prosper you and not to harm you, plans to give you a hope and a future."'  -Jeremiah 29:11   Though our children sometimes seem to listen to everybody but us, God has plans.  Her peers may color who she is now, but Jason and I are with her for the journey.  We get to be there when those long ago spoken truths begin to inform and transform. But we must also be faithful to pray for our children.

.Those of you familiar with the late seventies or Kermit the Frog may remember the song The Rainbow Connection.  The lyrics are hard to follow, but I like the last stanza. It sounds to me as if the voice comes straight from the soul of a child.

... Have you been half asleep? And have you heard voices? I've heard them calling my name. ... Is this the sweet sound that calls the young sailors? The voice might be one and the same I've heard it too many times to ignore it It's something that I'm s'posed to be... Someday we'll find it, the rainbow connection, The lovers, the dreamers, and me.

Hold tight.  Pray.  Teach them. Be that still quiet voice that has been heard too many times to ignore; the voice that helps show them who they are supposed to be.  In the picture, at the end of the rainbow, it's my hand that Hallie is holding.  The colors that now capture our children's attention will be like a rainbow that suddenly evaporates.  When the rainbow fades, our voice and values will remain.  We will see those plans the Lord had for our children coming to fruition.  I am secure in their future and thankful for the promise. Trust and see beauty in the journey!

One thought on “At the Rainbow’s Edge”