It was a really good day, I told him as I leaned over to peck him good night. We had all three kids, four including our precious daughter-in-law, at the dinner table. Our oldest, Hayden, turns twenty-three tomorrow. Jason grilled steaks, as per Hayden’s request, and I fixed two boxes of Kraft macaroni (also Hayden’s choice) along with some asparagus and fried zucchini. The zucchini was my idea, after being insulted by Hayden's boxed macaroni idea.

Dinner last night was accompanied by happy memories and impromptu character impressions, one of our favorite forms of entertainment. We had cookie cake and then somehow talked Hayden, and Haley (his lovely wife), into watching Dancing With the Stars, with us. It’s a tradition the girls and I have. During the DWTS season, we have a standing date to watch it together, and to have dessert. We guess what scores the judges will give each performance and, sometimes if we’re particularly fond of a dancer, we’ll cast our votes on our phones.

This season White House Secretary, Sean Spicer, is one of the contestants. He has about as much coordination and sauve as I do (I lay flat on the floor immobile for several minutes last night before I went to bed after forking my toes on the upstairs metal shoe basket that’s been there for six months.) Though Spicer has consistently been one of the lowest scoring dancers, he’s managed to stay on the show every week due to popular votes versus his Cha Cha or Viennese Waltz skills. I kind of like the guy. He gives it his all, even though his all isn’t what the next guy’s is.

He survived elimination again last night, much to the frustration of our two girls, Hallie and Rylie. To express their disdain at America’s choice, they got up from the couch and faced each other in our living room. While the credits played, they gave a captivating rendition of the dance Sean and his partner Lindsey had performed. They took turns dancing awfully, intentionally misstepping much to my delight. I tried to sneak a video of them, but got caught. 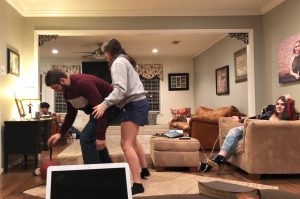 Let them dance dangerously close to the lamp (or play basketball.)

And while it's happening, stop what you’re doing and soak it all in. 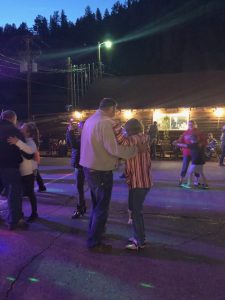 Hallie’s going on a road trip this weekend. Though I’m a proponent of ditching worry, I’d be lying if I said I wasn’t worried about her safety on the road.

Rylie has another tryout tomorrow. She has an athletic stature and a competitors heart, but that has yet to help her survive the sports eliminations that have come around a couple of times a year for the past two years.

Last year, she tried out for drum major. Knowing she wasn’t going to get it, she approached me five minutes before the tryout results were announced and nervously laughed, asking me if I had my It wasn’t in God’s plan speech prepared.

The truth is, we can't insulate ourselves well enough to perfectly combat every disappointment. Believe me, I’ve tried. The night she didn't make drum major, we took her and her sister, who’s heart (by the way) had also been broken the same day, to Roadhouse aiming to make them feel better by feeding them steak. I’m sure I spouted off perspective and Jason told bad jokes.

We have some control over how we respond to the tough times, but last night reminded me that the time surrounding the difficult bears more weight than I’d considered. What’s in the storehouse when times are meager? The Burdens added another meal around the table last night. We added bad dancing and laughter.

We have no choice but to allow disappointment its place in life.

But merrymaking in the lulls in between? That’s up to us.

I've written a book! Get chapter one for free, or use the link to buy the book below.

5 thoughts on “Dancing With the Stars”