Jason told me I would end up writing a post about this. Life happens. I think of some lesson that applies.  And then I spill it; shamelessly (and with pictures whenever possible).

Rylie, our eight year old, went roller skating for the first time Saturday. It was a pleasant experience for the first two hours. She was stylin' with a red-blinking pacifier necklace when she got home. She was also stylin' a knot (the size of a Red Delicious) on her right ankle. The past few days have been a bit cuckoo. We've spent four days repeating the familiar acronym R.I.C.E (Rest, Ice, Compression, Elevation). When she wasn't on the couch, her ace-bandaged leg flailed about precariously as she made her way through narrow doorways and as her crutches stutter-stepped on the pavement.  I sustained my own injury trying to help her down the stairs on Monday.  Despite all attention and caution, Rylie had a nasty-looking ankle and we were sent to an orthopedic doctor. 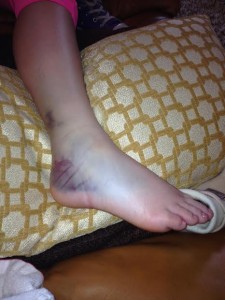 We could hear the doctor in the hallway while we waited for him in a room that suggested that this guy is a little golf-crazy. I'm still wondering how he has enough autographed pictures to cover four walls. His voice was jovial and familiar. Rylie commented that he reminded her of somebody, though a wall still stood between us. Dr. Hall walked in and introduced himself to Jason and I and then turned to Rylie.

He poked fun (appearing to enjoy his taunting even more than golf). He checked her foot, explaining that it was the worst sprain he'd ever seen, then proceeded to share his plan. He asked if we had any questions.

I acted my normal nervous self in new situations and stammered something awful. I started to ask a question, stopped, and then started with a different question…..several times.

"You going to get one of those questions out,??" he interrupted.

That's who he reminded me of, I decided. Loud. (Sorry if you're reading this David) Rude. Hilarious (if you're a good sport).......

He was like my brother. And from what I know about Hayden, and most of the brothers I've watched interact with younger siblings, he was like any brother. I was able to finish my list of questions with ease, sure that I'd get razzed for the questions on my "mom list", but certain that he'd answer too. And he did. 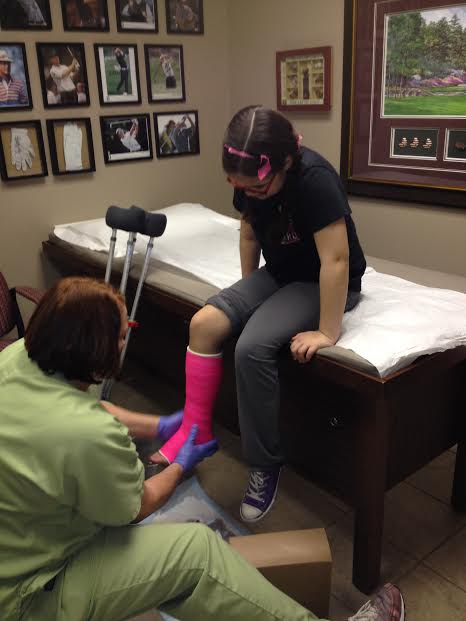 The doctor came in once more to make sure we felt comfortable with everything. As he warned Rylie not to stick ANYTHING in her cast, I shared that she'd probably learned that lesson from one other time in the ER when she'd stuck a rock up her nose. He told how he'd been a hero to his own little brother one time with a similar incident.  Unlike his panicking mom, he'd kept his cool and placed a finger on his brother's nostril closing it off. He instructed his brother to blow, helping him shoot a peanut out of his nose where it'd been lodged.

Our doctor visit today made me think about the value of behaving like brothers…..and sisters in any and every situation.

As brothers and sisters we have a responsibility. It's not merely an asset to whatever job we have. It is the job.

Treat those in need as you would a friend. Be familiar. Associate with them.  Give them the time of day. Familiar must surely come from the word family.

Be yourself, assuming that "yourself" is someone pleasant. Be not only professional, be relatable.

"People will forget what you say (or how you helped fix their problem), but they won't forget how you made them feel." -Maya Angelou (minus the parenthesis)

Be a hero. Be genuinely concerned; not just about the problem at hand.  Care about the person.  There are people you encounter, friends and strangers facing battles of all shapes and sizes. Not all people announce their business like I do. But you can be assured that they need a brother. They need a sister.

There's a world in need.  You were born for this!

P.S. Already found a perk to this casted-ankle mess. I only have to find one clean sock every morning.

2 thoughts on “Help a Sister (or brother) Out”